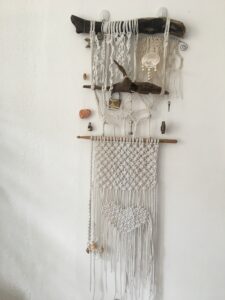 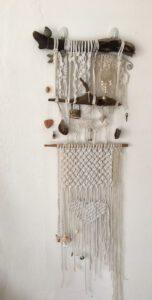 …though yet to be completed!

Guess it’s always the case with creative pursuits that one never completes but keeps adding as and when one feels the need to 😀😃😄. Current technology I’m afraid, affording you every freedom do so ☺️.

I have a fair idea of how many more additions will be made to this work. But one never knows absolutely 😁 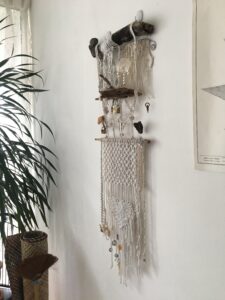 The macrame, wall hanging, done with using drift wood as a dowel, a real drum 🥁 stick, (GuitarHero), I found in the parking lot, rope, cord or twine and sea shells 🐚, mostly, tells a tale.

The other elements I’ve added are a rusty key 🔑, a piece of sea brick 🧱 I would like to think, a piece of drift wood, padlocks 🔒 🔐, a steampunk vial 🧪 with sea 🌊 sand and shells, I might be adding a steampunk vintage clock 🕰 element and a steampunk inspired butterfly 🦋 to the mix. Left to be seen 😊. 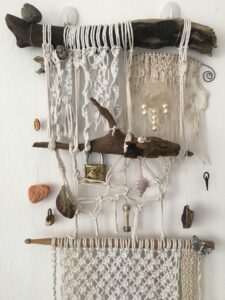 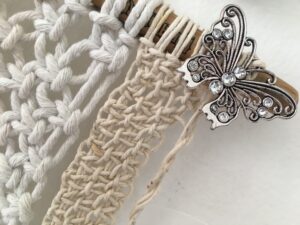 So, all these elements go to tell a story.

All these items except the steampunk items, have been gathered by me in my numerous adventures or in my ordinary day to day roaming.

Let me talk you through the macrame knots themselves, first. I’ve not done anything fancy here, as this is my first attempt at macrame. I’ve used the square knot mostly, which I found somewhere also being called the slip knot! 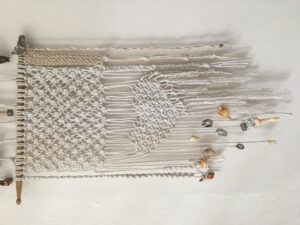 Now you’re getting at something. Yes. I particularly went for the square knot, as in my sinister book, I’m intending to ‘kill’ off a lot of them 😱🤬 Not forgetting that Slipknot is a fave band of mine.

Then, I have used the spiral knot and half hitch as explained in the video below ⬇️ 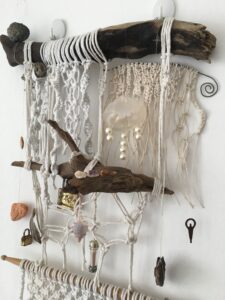 This video shows how to do spiral and half hatch knots.

Note: Each strand of cord or twine must measure three times the length of the finished work. So, if you want a one foot long finished piece of work, your strands must measure three feet each. If you run short, as in you use up a cord, you can always attach another piece to the existing one by stitching it on.

The beginning knot, the initial knot that is trussed on to the dowel to begin, is called the lark’s head. You can do it in the reverse as well. I must admit here, that I have also done some knots of my own. Now, I’m not absolutely certain they have not ever been done by some one else before. But as far as I know, I mean, I never followed a tutorial on Pinterest or a Live video in creating them.

What I want to emphasize here is that you may do your own thing here, and you don’t have to follow established and accepted knots in your work.

After all, macrame was apparently started by sailors in days gone by who literally had ample time and you guessed it, ample rope on their hands! So, they made various items using this rope and sold them to willing buyers and made a tidy sum when they dropped anchor at the numerous ports.

This particular wall hanging of mine was inspired by my need to tell a story in a secretive way. Like it says in the Wikipedia article on Macrame, that sailors made macrame items to hide their various belongings like knives, bottles, and so on. So I too am hiding my idea to which I have sworn to secrecy 😌 more or less, while I Liked and Shared Hashtags like #LockThemAllUpAndThrowAwayTheKey on Instagram 🤬😄

So, there you go I’ve already given out a huge clue ☺️

The piece of brick may represent #BulidTheWall, may be 😁 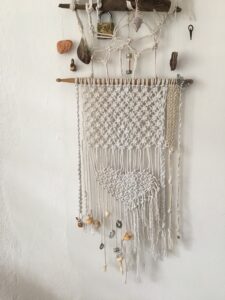 The heart image I have done with the reverse square stitch, puts it all together: The water element, Love 💗, Unity and Freedom. That it is in a square knot in the reverse, is symbolic of all of the above in contrast to the regular square knot as a slip knot idea, that I have done above the heart shaped design. 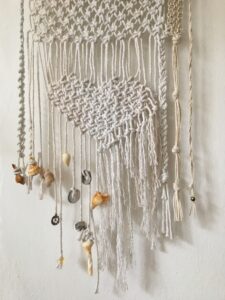 What I can’t help but notice are the similarities here in grid or grating, the grill as in cooking, the motif in Art, motif (narrative), in literature, leitmotif in music, all making use of the recurring motif to achieve a result or express or convey an idea. It also exists concurrently in each field of creative activity.
One goes on to wonder if life itself resembles a series of grids or motifs by extension?! As in Déjà vu, perhaps!

I had gathered some interesting trivia on macrame apart from the sailor story, but luck would have it that I needed to delete all of my Pinterest boards for a worthy cause.

If I’m lucky enough to stumble upon them once again, as I go along, I will definitely share them with you here 😊. So, until then, happy knoting or macrame-ing to you.