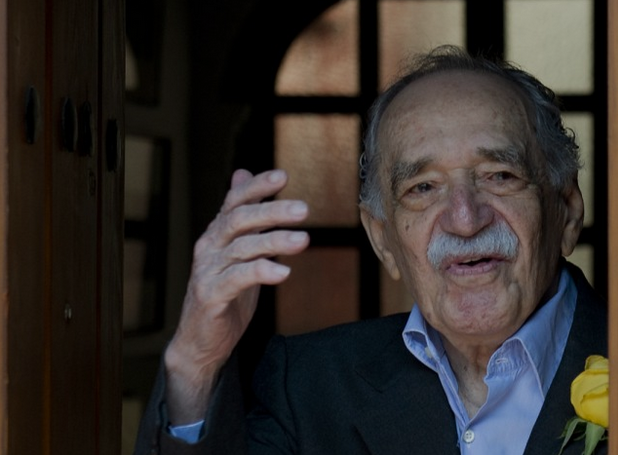 “Fermina”, he said, “I have waited for this opportunity for more than half a century, to repeat to you once again my vow of eternal fidelity and everlasting love.” – From ‘Love in the Time of Cholera’ by Gabriel Garcia Marquez.

Gabriel Jose Garcia Marquez the writer par excellence has died. He was born on 6th March, 1927 in Aracataca, Colombia and died on 17th April, 2014 in Mexico City, Mexico, where he lived for most of his later life having fled the Colombian government’s persecution of him for his involvement with the leftist and guerrilla movements at the time. Marquez suffered from lymphoma and dementia and later succumbed to pneumonia. He was 87. He leaves behind his wife, Mercedes Barcha, who appears in his novels and his two sons, Rodrigo, a film maker and Gonzalo a graphic designer, and a plethora of literary genius in the form of novels and short stories.

My first introduction to Gabo as he’s fondly known was his epically famous novel ‘One Hundred Years of Solitude’, which my son brought back from the library. Having read the voluminous book he insisted that I read it and I was instantly smitten. I had heard of him but had not read him. Then I read ‘Love in the Time of Cholera’. Thereafter I went on to purchase ‘Chronicles of a Death Foretold’, ‘Nobody writes to the Colonel’, ‘Innocent Erendira and Her Heartless Grandmother’, ‘The General in his Labyrinth’ and ‘Memories of my Melancholy Whores’, all of which I have since sadly lost!

But my memories of how his work entered my veins and streamed down and on to the pages with the intensity with which it did in my own work, live on. I had broken my fervent principle that I should not read too much hence I get overly influenced. That was the kind of impact that Garcia Marquez had on you. Once you read the first line you were caught for good. You wouldn’t leave the book aside for anything, maybe beside your basic needs. Just as soon as I had finished writing those pages, I had the worst break down ever and now that’s another story.

One morning Marquez was driving his family out on a holiday to Acapulco when the first line of what was to become ‘One hundred Years of Solitude’ which was to win him the Nobel Prize in 1982, came to him. He immediately turned his car around and drove back home, stuck himself in a room for 18 months and gave birth to his marvelous creation. When he emerged from his own solitude he found his wife having pawned everything including the furniture. But he had in his hand the pages of the book which sold more than 50 million copies worldwide in over 25 different languages. His work became the single most published in the Spanish language that outsold everything other than the Bible. ‘The story of his life and career is as beautifully shaped and fabular as one of his stories’ – says American novelist Francisco Goldman.

Garcia Marquez was the master of the literary genre of magical realism. This writer of intoxicating novels and short stories wrote of Latin America’s passion, superstition, violence and inequalities. He was widely recognized as the most popular Spanish-language writer since Miguel de Cervantes of the 17th century. The Colombian born Nobel Laureate achieved literary celebrity status that spawned comparison to Mark Twain and Charles Dickens. But he was evidently more.

His inspiration was to come from the time he lived in Aracataca in Colombia with his grandparents as a child. His grandfather would give him the historical background to his life and his grandmother would fill him with wild stories of superstition and the bizarre. He would later be influenced by Hemingway, Virginia Woolf, Faulkner, Dostoevsky and Kafka which he read during the time he was in a state-run boarding school outside Bogota in Colombia.

Macondo, the fictional setting for his ‘One Hundred Years of Solitude’ was his own childhood village of Aracataca. He was the eldest of 11 children born to Luisa Santiago Marquez and Gabriel Elijio Garcia, a telegraphist and a wandering homeopathic pharmacist. Just after his birth his parents left him with his maternal grandparents and moved to Baranquilla to open a pharmacy. He spent 10 years with his grandmother and grandfather who was a retired colonel who had fought in the devastating 1000 Day War that marked Colombia’s loss of the Panamanian isthmus. One of the most famous opening lines of all time “Many years later, as he faced the firing squad, Colonel Aureliano Buendia was to remember that distant afternoon when his father took him to discover ice”, the first line of ‘One Hundred Years of Solitude’ found its beginnings here.

Such was the magicality of his work. A man with a pig’s tail, another who was followed all around the village by yellow butterflies and a woman who gave birth to an iguana…He masterfully takes these seemingly implausible tales and turns them into reality. He takes the bizarre and transforms them into a commonality. He brought the world of journalism and literature together. As he always said, “The novel isn’t found in the dead…but in the living sweating ice in their hiding places.”

His grandparents’ tales provided grist for Garcia Marquez’s fiction. As Aracataca became the model for “Macondo,” the fictional village surrounded by banana plantations, ‘One Hundred Years of Solitude’ was born. The tragic irony of the image where the banana train eventually comes carrying thousands of massacred bodies has left an ever haunting memory in me. Yet, the story in itself was never a sad one for me but rather a triumphant one.

His writing was constantly guided by his leftist political views, largely forged by a 1928 military massacre near Aracataca of striking banana workers against the United Fruit Company, which later became Chiquita. He was also greatly influenced by the assassination two decades later of up and coming leftist presidential candidate, Eliecer Gaitan. Garcia Marquez once told an interviewer, “I have often been told by my family that I had started recounting things, stories and so on, almost since I was born – ever since I could speak.”

He published his first work of fiction as a student in 1947, mailing a short story to the newspaper, El Espectador. Later, ‘Leaf Storm’ Garcia Marquez’s first novel took seven years to find a publisher. His father insisted that he studied law instead he dropped out and became a journalist. He spent many years in Europe. He was to later say that he wondered where all these people who had flocked to him in his fame were when he was penniless as an unknown writer and living above a brothel. He said this was the best place to write since by day there was quiet and at night it was one big party.

Garcia Marquez publicly feuded with the Peruvian writer Mario Vargas Llosa, but never declared the reasons for it. Llosa wrote the book, ‘Garcia Marquez: The Story of a Deicide’, in which he describes Marquez’s struggle with “the historical demon” of Colombia’s horrific political violence, la violencia when 300,000 people were killed under less than ten years, and how the writers were under pressure to write in a politically “responsible” and “realistic” way. He was a close friend of the Cuban leader Fidel Castro. His fame brought with it many differences of opinion about the very genre of magical realism as well as views on how he lived his life mingling with right wing politicians and even with political criminals as against what he upheld in his writing. But, the lesson to be learnt here maybe to focus on the writing and not on the writer and how he lived his life. As a Mexican journalist Alma Guillermoprieto says, “… Everything attracted his voracious curiosity and hunger for the world.”

Here is a fitting epitaph by a fan, on Twitter – Radha Krishnamoorthi, Chennai, India:

“I have never known you, yet known you. I have wandered in your labyrinth, a 1000 years, in solitude, in times of love and cholera, with my memories, the general, the patriarch, the many rivers of the south, my melancholy whores, the occasional news of kidnappings, deaths foretold, chronicles of magic and of reality. Vaya con dios mi hermano. RIP Gabriel Garcia Marquez. Gracias.”

Gabriel Garcia Marquez was cremated at a private funeral held by his family in Mexico. Both Mexico and Colombia had a ceremony in Mexico City’s majestic Palace of Fine Art where his ashes which were placed in a black box were kept in the backdrop of its towering columns and murals by Diego Rivera, for thousands of mourners to pay their respects. A symbolic funeral was held in his birth place Aracataca, Colombia. Yellow being his favourite colour and considering he always wore a yellow rose in his lapel, yellow roses surrounded the box holding his ashes. Crafted yellow butterflies were thrown into the air while his best loved music Vallenato, Beethovan, Mozart, Bela Bartok and Giovanni Bottesini were played. He once said of the upbeat accordion-laced musical form native to the Caribbean coast of Colombia, where he grew up, “‘One Hundred Years of Solitude’ was a Vallenato of 400 pages.”