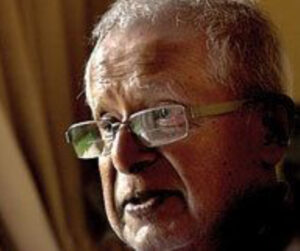 It was only yesterday that I mustered enough courage to search Tissa Ranasinghe, Sri Lanka’s sculptor of great repute, on the Internet. I searched the Internet not wanting to see what I might, having heard that Noeline Fernando*, Sri Lankan painter and art teacher, had passed away suddenly, in her sleep. I wasn’t ready for anymore surprises of the sort. I then proceeded to search Oosha Saravanamuttu and found to my utter dismay, that she too had passed away on 24th June 2019, at the age of 83! When I heard from Jith Pieris that she had been stricken with the cursed dementia, I prayed for her quick recovery. I believe her condition must have eased even some what.

These are all venerated names in the art circle of Colombo, Sri Lanka. Oosha being the renowned ballet dancer and teacher. I remember her ballet school being known as Oosha Garten of Western Ballet, something I found none of those who wrote about her mentioned. They are all sadly missed: Noeline, Oosha or aunty Oosha, and Tissa.

However, I am here today to remember Tissa Ranasinghe, (9th May 1925 – November 2019), the Master Sculptor,  sculpting in bronze and doing it perfectly and prolifically at that.

I know it is eight months since Tissa’s sad passing, but I need to put things in to perspective, things that I couldn’t talk about openly when Tissa was with us.

I met Tissa through Noeline. I had known Noeline since I was five years old. I got to know Tissa in my thirties. Noeline and I were neighbours at Stratford Avenue, Colombo 06, Sri Lanka. So was aunty Oosh, though aunty Oosha lived a few doors down the road. I remember as a teenager, Tissa being a very prominent feature having been the witness at Noeline’s first marriage to Malcolm Adaman. That was a most delightful wedding to be remembered.

By the time  I met Tissa, Noeline had divorced Malcolm and her second husband, Gihan Welikala. I was back in Colombo, from Kuala Lumpur, Malaysia, with two kids, having left a husband behind, who opted to stay behind, threatening to leave for America, where he would remain for a good twenty years.

I was in Colombo, doing a copy writer’s job at Minds Lanka (Private) Ltd., and writing poetry. I recall meeting Tissa for the first time at his nephew’s residence in Layards Road, Colombo 05, where he stayed on his visits to Sri Lanka, and being saddened that Tissa was not taking much notice of me. Later, he told me that Noeline had told him of this poet friend of her’s. Somehow, after that meeting, I went on to meet Tissa alone by myself and we became close friends.

Tissa used to send me a fairly large envelope full of paper clippings, fortnightly, all the way from England, where he lived. This envelope would carry every thing that appeared in the newspapers on literature, the arts and jokes 😀. 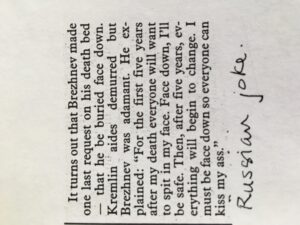 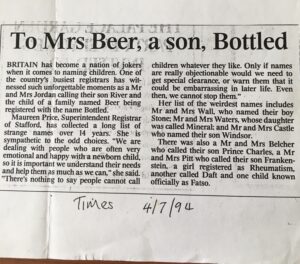 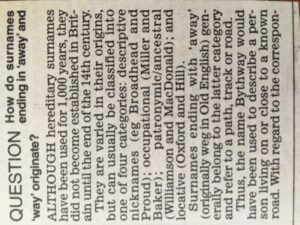 One for the road –
What do a lobster and a Pakistani under a bus have in common?
They are both Crushed Asians!

One more –
Senior citizens are always early to the bus stand or train station. And they ask themselves, “too early?”! So they come to be known as twirlies 😂.

I learned a great deal from reading them. He would make his own witty comments when ever he felt it was called for.

However, my inspiration was to come from being with him, this fountain of knowledge, experience and artistry. His sculpture, particularly of the Hindu Pantheon of gods drew me to the many Hindu temples of Colombo. My curiosity of the Hindu gods grew from his association.

I speak of this influence in my poem called, At the exhibition, (Published in Wet Paint, p35, Minerva Press 1998, ISBN 1-85863-872-0). I can definitely say that this interest in the Hindu gods lead to my poems on the gods, in particular the one of Lord Ganesh, called, Ganesh: The Prince of Princes. This poem was followed by two more, one on Lord Shiva and Lord Vishnu and one on the Goddess Badhra Kali. 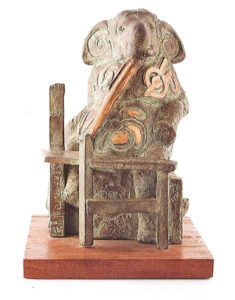 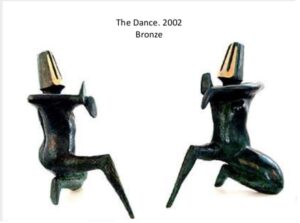 On one of his visits to Colombo, he would bring me this wonderful folio of several paintings, (very expensive prints), from the Hindu Patheon and he would go on to send me by post, a beautiful print of the entire Pantheon itself, which I need to put together and frame. I have framed three prints of Ganesh from the collection. While two are with me here, with one being of a whimsical Ganesh in a dance pose, with anklets of bells or geyjji, which I made a replica of and hung on the frame, which now guards the entrance to my bedroom. The other whimsical one adorns  my front entrance. 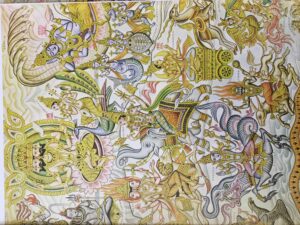 Screenshots of the Print of the Hindu Pantheon of Gods, titled, The Gods And Demons, and a detail of the Print,

I had to part with the framed Ganesh of Saraswathi on his folded leg, due to exigencies of having to move spaces.  It is in the good hands of my friend Guy, Gajendran Makandan.

I gifted a most beautiful print of the holy family of Shiva, Parvathi , Karthikeya and Ganesh to Sunila Abeysekera.

The rest are thankfully still in my safe custody and possession.

My even thinking of the collection of poems that came to be called WET PAINT, ever being published became a reality only due to Mr. Tissa Ranasinghe’s largess of heart, which made him mail me the clipping of the address to the publisher, Minerva Press, London.

He insisted that I write to them on getting my poems published. From then on he kept checking up on my progress with the work related to the publication and following up at every turn. I even gave his home address as my own address to Minerva Press. All correspondences would come to Tissa’s address and he would diligently and painstakingly mail them back to me in Colombo.

Here’s the stanza from the poem, At the exhibition, that reflects on the doyen: 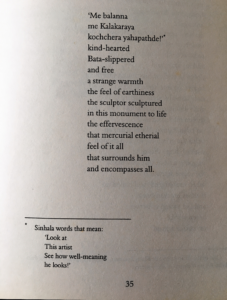 It is unbelievable how Tissa not only helped painters, artists and sculptors, he even helped me a fledgling poet, immensely, in the pursuance of my writing career. At a time when I was getting scares support from those of my ilk, like my lecturers and professors, Tissa was that rock or that bronze, so to speak, that endorsed me without reservation, unstintingly.  You felt authenticated, accepted and anointed. It was a right of passage to the world of the arts. It was yours’ to brandish at will!

I enjoyed his company, needless to say, totally. He was also a linguist being proficient in the English Language as well as in Latin. His exceptional knowledge of both languages lead him to being in complete command of the details of grammar and spelling in both.  It was an honour to be corrected by him or put to right by one as astute as he was. You gained so much by simply being in his presence. It was also Tissa who encouraged me to write a piece to the newspapers announcing and introducing one of Noeline’s many exhibitions. This one was held at the Barefoot Gallery, Colpetty, Colombo 03. He asked me to write it, that he will have it published, and it was a kind of meeting point for all three of us. I make mention there that creative people gain from one another, something I strongly believe in. It’s a kind of sharing of inspiration as it were, for, no man is an island unto himself.

Each time he returned from England, he would come laden with a book or two or even more for you. It was Tissa who introduced me to Neil Rollinson, through his collection of poems, A Spillage of Mercury. He gave me a copy of Sappho’s poems, Gyles Brandreth‘s Word Play on the origins and coinages of English words, with illustrations and a book on Shakespearean puns, which I lost in my innumerable moving-s, sadly. I need to get these books for myself online.

Even as I type, I’m looking into the Ganesh at the entrance to my room, dancing away to the music pouring forth from my phone’s radio/YouTube channel, with great mirth.

Once Tissa even brought me the audio book of Jane Austin’s Pride and Prejudice, which I wanted to give a friend at the time, who had suffered a spinal injury and was prevented from reading.  Such was his all pervading sense of generosity.

When Sumitra and Sunari were way in to their art classes and learning sculpture, he would come with a slab of clay from the tile, (ulu), makers in Alawwa if I remember right, may have been on his way back from his hometown, Yogiyana.

If I may recall one of his humorous anecdotes, on his return back from having had met with the then head of state in a chauffeur driven limousine, having accepted an invitation to Temple Trees, the official residence of the head of state at the time, he stopped and got off mid way saying, “this is where my coach turns in to a pumpkin”! his sartorial choice for the occasion were his ubiquitous short sleeved bush shirt, shorts trousers and flip flops!

This beautiful friendship continued unabated until I was taken ill. Even before it came to that, leading up to my illness, my behavior was becoming erratic and I believe inexplicable. Once I recovered, between 2010 and 2011, I wrote him an email. I managed to get his email address with difficulty. I wonder if it ever reached him. Later, Noeline wouldn’t part with any information regarding Tissa, except to say that he was short of hearing. I was hoping and praying that one day soon we could meet again. It was not to be! My recent searching has lead me to understand that even when he was in Colombo for his final exhibition in 2011, he was wearing a hearing aid. Which meant that he could hear. He was not entirely without hearing.

He was told of and aware of my tremendous predicament and was trying to reach out to me urgently; I was sadly unable to respond also due to my recurring ‘illness’. Once while at Noeline’s apartment in Mt. Lavinia, on one of my visits, Tissa was also in Sri Lanka at the same time. He wanted to make amends by asking me to give him 25 pieces of an item that signified the amount of money I had borrowed from him but was unable to return to him due to my insurmountable situation in life. I gathered them together in a package but left it with the security guards downstairs for him to pick up. I now recall this incident with much regret for not having met him on that day.

Mr. Tissa Ranasinghe has left us with a void that cannot be filled. A great and most marvelous human being. Now no more. Tissa, you are sadly missed. May you attain the supreme bliss of Nirvana.

*I have left a message of condolence and appreciation to Manik and Dilsiri on Noeline’s blog. I hope they find it there.