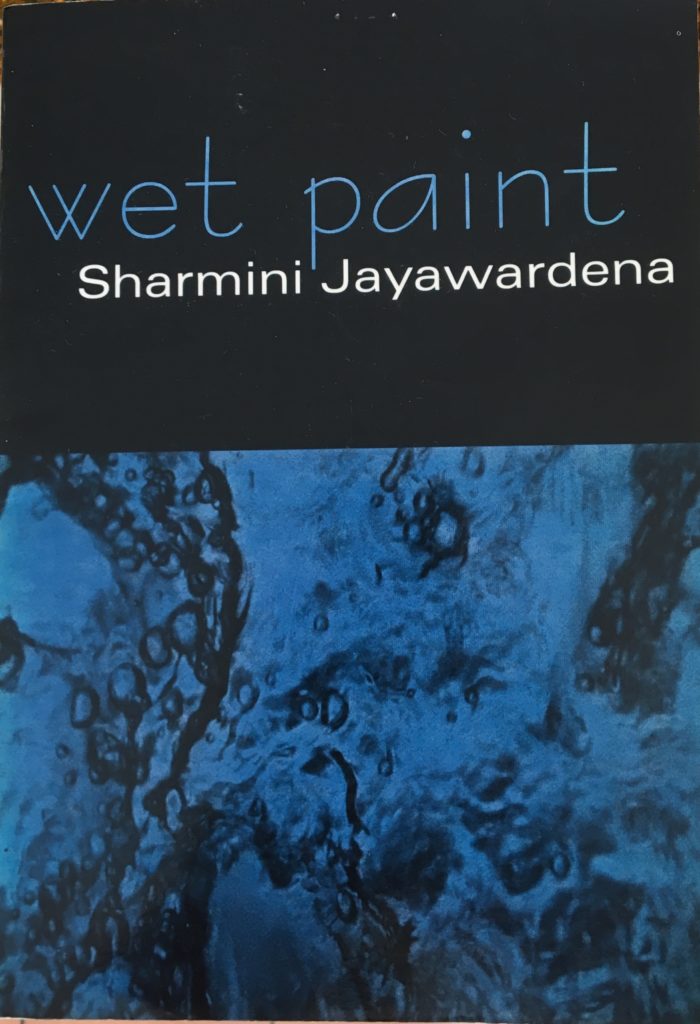 Words of love,loss and outrage

Wet Paint by Sharmini Jayawardena .
Reviewed by Alfreda de Silva
*
Poetry has been many things to many people. The poet Robert Lynd proclaimed it was “born under a dancing star”. A later wit declared that “a lyric and a limerick were both poems.” He obviously meant their musicality and movement and who can deny that?

Defying them both, the American poet Archibald Macleish asserted, quite controversially:

Someone went a step further: “………. poetry is a hard diet, fit only for the athletic among readers.” This puts the onus of readership for poetry (a comparatively small one already) squarely on the poet.

Sharmini Jayawardena’s book of poems ‘Wet Paint’ dwells on themes as varied as love and passion (fulfilled and lost), alienation, protest, violence, disillusionment, despair and other dissonances including the cold world of machines. All these are viewed critically in a contemporary setting, and present a kaleidoscope of images, many of which await redress and relate to women’s issues.

Database opens the book with:

Down to earth and symptomatic of the times in which we live, and its ‘sci-fi’ pace, this is one of her concerns.

Getting away from the cold of machines to a love poem, we have:

In sharp contrast to this is an entrance into the real world of an unbearably painful relationship – The Enigma:

“I loved you strong enough
with battered back
and aching feet
doing chores on chores
around sparse walls
wailing kids were tended
birth to infancy thru…..
even when birth was
plucked away from my abdomen
in shrieking crescendo…..

Mirage is a poem of protest against an unfeeling mother. The last lines encapsulate the magnitude of the cruelty.

“But mother…
oh mother….
Mother how can you shut
the door behind us!”

The Quasi-Corporate Player’s hypocrisy and immorality are brought out in the poem by its name.

“He called me up
this ‘quaintance from the past
wanted to get
to know me better he said
Took me out for a bit of lunch
no, he didn’t want me
to get to know his wife
too well he said. Indiscretion was out of ‘the question…”

The subject of child abuse is poeticized in Struggle, which takes up the socially sensitive issue as seen in a bus. The Boy Man doles out money to a boy, for buns and sweets:

“to his charge.
who hung to him
like son to father…”
Imbroglio, a war poem brings a threatening darkness and reality to the reader.

Sharmini’s well-crafted Symphony in staccato (a prose poem) speaks out daringly about a woman’s personal predicament in marriage.

Here and there the bold, harsh lexicon proclaims her sense of outrage on behalf of all women:

“tonight we speak out
where we have been silent
for too long
and spell out
what has held us back
for eons of time
women have remained silent….

On the way to Ahungalle is a fresh cooling draft of wind on my face:

“barrels of ra
some on carts
some propped up
on the wayside…
some rolled out
for you and me
to bask in…
A sudden expanse
of sparse land across
water, then water again
The sea
a roaring Tritonic blast…” 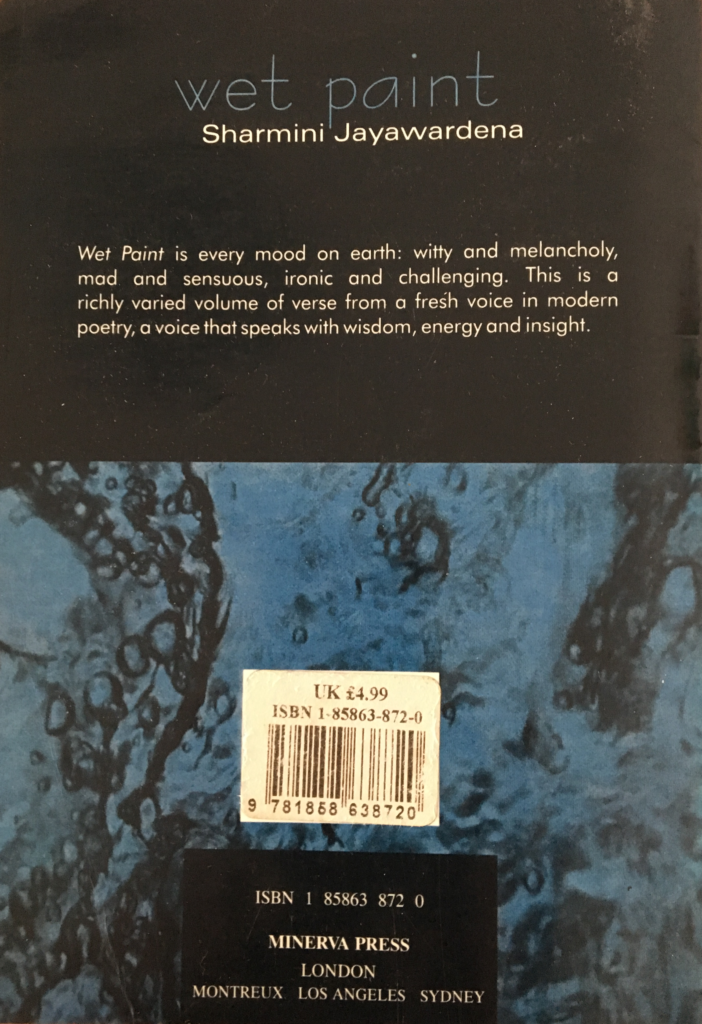