I heard a story many years ago about a Factory Superintendent who had the daily responsibility to “blow the steam whistle” signifying the beginning, lunch hour and end of the work day. As was his custom, he would set his own personal timepiece by the Church Bells down the street, and then, using his own watch blow the “steam whistle” at the appropriate times during the day. This went on for years, when one day he got thinking to himself, “how do I know that the Church Bells are ringing at the right time?  I set my watch each day by them, yet I have no idea if they reflect the actual correct time.”

But as he thought, he reasoned away that “they must call the National Institute of Standards,” or some other government service to calibrate their own clocks, so I shouldn’t worry.” But the more he thought about it, his curiosity got the best of him and he decided that he’d personally go check things out at the Church. So, one morning after “blowing the whistle” at the start of the day shift, he walked down the street, walked in and asked his question in the Church office.

He was pleased to find that the church staff were all very nice people, and more than willing to help him. So, after several minutes of discussion, and a phone call – the “Church Maintenance Engineer” entered the office stating, “so you’re the guy who wants to know how we set our time for the Clock Tower that makes our Bells ring on the hour.  That’s an easy answer, I just listen for the Factory Whistle down the street at the end of each work day, and adjust my own watch to match.  That factory whistle goes off like clock-work, and they’ve never been wrong in the 30 years I’ve been here!”

You can immediately see the problem.  Comparing one imperfect standard  to another imperfect standard, doesn’t give you an accurate comparison! You need some objective standard that isn’t compromised by human frailty or error.  But sadly, all of us as fallen people do much the same thing, comparing ourselves to other fallen people and making the wrong judgements as a result.

Paul the Apostle, writing to the Corinthian Church had a similar dialogue with them, as they made their comparisons of Paul with other ministers, passing judgment on each as they saw fit.  Paul admonishes them “to not think more highly of one over another (or themselves) than they should, ” because all gifts and blessings flow from the hand of a gracious Heavenly Father above. In I Corinthians 4:6-7 Paul says:

“Now, brothers and sisters, I have applied these things to myself and Apollos for your benefit, so that you may learn from us the meaning of the saying, “Do not go beyond what is written.” Then you will not be puffed up in being a follower of one of us over against the other. For who makes you different from anyone else? What do you have that you did not receive? And if you did receive it, why do you boast as though you did not?”

I do believe that the phrase: “For who makes you different from anyone” was a turning point for St. Augustine, as he finally grasped what the verse meant for him:  “Don’t be proud or arrogant against others, or think too highly of yourself or your own knowledge, for whatever you have IS A GIFT FROM GOD!  SO DON’T BOAST, WHATEVER YOU THINK YOU HAVE, IT DIDN”T COME FROM YOU!”

To be honest, that’s a good starting point for all of us as well, beginning 2022. Realizing that what we have, who we are, and the grace and knowledge that we think we have – IS ALL A GIFT FROM GOD!  God is sovereign in our lives, and how He dispenses His gifts & mercies.  The worst mistake is to somehow believe that personal gifts come from us because of our own strength, wisdom, or virtue.  And comparing ourselves to others is complete folly.  Just like the Plant Superintendent and Church Engineer looking to each other was folly, we need to look to an “external absolute standard” to judge rightly!

That standard is none other than God’s only begotten Son, Our Lord Jesus Christ!  He’s the absolute standard of righteousness, virtue, wisdom and knowledge!  So, if we think to boast in our standing, the  scripture brings us back to reality, letting us know that we’re not that special.  II Corinthians 1:26-31 says:

For consider your calling, brothers: not many of you were wise according to worldly standards, not many were powerful, not many were of noble birth.  But God chose what is foolish in the world to shame the wise; God chose what is weak in the world to shame the strong; God chose what is low and despised in the world, even things that are not, to bring to nothing things that are, so that no human being might boast in the presence of God.  And because of him you are in Christ Jesus, who became to us wisdom from God, righteousness and sanctification and redemption, so that, as it is written, “Let the one who boasts, boast in the Lord.”

Let our boasting and confidence come from being approved of the Lord, and not by man. There will not be a more precious word spoken to us than when on that day we hear Him say: “Well done, good and faithful servant!” (Matt 25:21)  What we have, we have sovereignly received from the Lord. This is the ground of real confidence, and security.  Not the boastful kind that stems from selfish human pride, but a confidence in the Lord and His mercy.

At one point in Jesus’ ministry, He sent out 72 Disciples to “prepare the way for every place where He was to go.” Later as they triumphantly returned, and realizing the incredible “power and authority” that Jesus had bestowed upon them, we read Jesus’ admonition to them in Luke’s gospel:

“The seventy-two returned with joy, saying, “Lord, even the demons are subject to us in your name!” And he said to them, “I saw Satan fall like lightning from heaven. Behold, I have given you authority to tread on serpents and scorpions, and over all the power of the enemy, and nothing shall hurt you. Nevertheless, do not rejoice in this, that the spirits are subject to you, but rejoice that your names are written in heaven.” (Luke 10:17-20)

Let me honestly confess, that I too struggle with this sin of pride. I look down on those who are uninformed, or naïve!  In my flesh I still somehow fancy that I’m wiser, and more understanding of the times we live in. When pride rears its ugly head, I’m reminded of the Pharisee who had this problem with the Tax Collector:

“To some who were confident of their own righteousness and looked down on everyone else, Jesus told this parable: “Two men went up to the temple to pray, one a Pharisee and the other a tax collector. The Pharisee stood by himself and prayed: ‘God, I thank you that I am not like other people, robbers, evildoers, adulterers – or even like this tax collector. I fast twice a week and give a tenth of all I get.’ “But the tax collector stood at a distance. He would not even look up to heaven, but beat his breast and said, ‘God, have mercy on me, a sinner.’ “ (Luke 18:9-13)

As we look to 2022, let’s remember that the reason for our blessings, gifts and knowledge is Jesus Christ!  And the only reason that we are different is because He has sovereignly written our names in heaven!  Not for anything that we are, or have done, but all for His own glory and purpose!  And because of Him, we have this great confidence – even in a world that’s in turmoil, panic and fear!

The daily news is a constant drum-beat of potential death and destruction on many levels.  Our Political Class has failed us, Corporate America, along with Academia and Medicine are blatantly political and the “whole world seems ready to give their power over to the beast” of one governing empire or another. And while we as believers are tempted to boast that:  “We are above the fray, not given to the panic or thought control that has gripped our fellow man,” we need to constantly remind ourselves: “What do we have that we have not received?” And if it’s all a gift to us from God, let us not boast over our fellow man who is still in ignorance  That is just our version of checking our Factory time against the Church Bells or vice versa. We need to compare to God’s absolute standard, His Son Jesus, the Christ, and be thankful for the Grace He has bestowed upon us, and pray for that same grace and mercy for our neighbor!

So, if any of us boast, let us boast in the Lord!  Not that “we know Him,” but that “He knows us, and has written our names in the Lamb’s Book of Life!”  Who makes us different from someone else?  Our God! 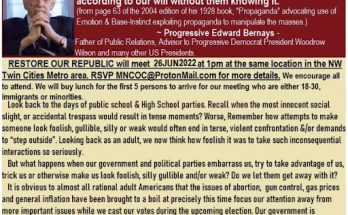