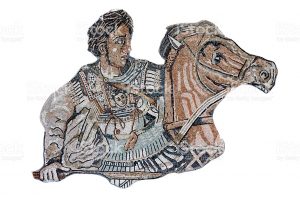 A  few days ago I happened to be browsing through YouTube and stumbled upon a documentary about the battle of Gaugamela where Alexander the Great defeated King Darius of Persia. In a strange coincidence the date on which I watched the video was the anniversary of the battle – 01 October;  the battle took place 2,347 years ago in 331 BC.  Wikipedia Article on the Battle of Gaugamela

No doubt by today’s standards Alexander would be considered a mass-murdering butcher, however, the times in which the ancients Greeks lived was very different from our modern world. Life was tough and horrendous killing during war was quite normal. Even so, it’s hard not to be inspired by the grit of the Greek warriors and the brilliant tactics employed  by Alexander. 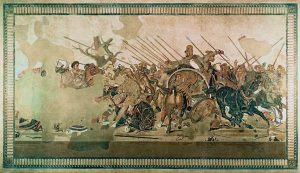 The Alexander Mosaic, depicting the Battle of Issus, dating from circa 100 BC, is a Roman floor mosaic originally from the House of the Faun in Pompeii.

Warrior soldiers trained extensively and were always at prime levels of fitness (surely anyone who’s putting-off a long overdue workout would be moved to action by the thought of the kind of discipline the Greek warriors showed in their dedication to training – Spartans exemplified this more than other Greek races). A Greek Hoplite or infantry soldier – who would usually fight in the phalanx formation – had to wear armor that weighed 30kg (70 pounds) – they also carried a spear (dory), sword (xiphos), and shield (hoplon). The physical endurance and mental toughness of fighting men on both sides of such battles was amazing. It just makes me marvel at how fearless people were in ancient times compared to some of the paltry, cowardly specimens of human beings we see today.

Here are some interesting videos about Alexander and the Macedonians; also a video about the Kalash tribe in Pakistan that might be descendants of Alexander’s army as they ventured into Asia. 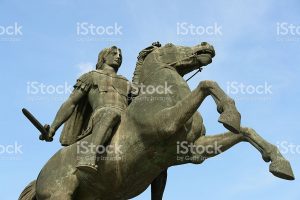 Documentary on Alexander the Great

The Kalash Tribe of Pakistan