I’ve been against the harassment of sex workers for many years now (harassment by both the government and the mafia). Getting to know the inside story through girls who work in the sex industry has proven to me that the farce of so-called police or government crack-down / action on prostitution is only a side-show. This story is repeated all over the world and especially in Southeast Asian countries like Malaysia. Prostitution just cannot be stopped because there’s too much money at stake. Police (i.e. the corrupt ones), Immigration officers (again the corrupt ones), certain Government officials, Chinese Triads, Mafioso’s and Gangsters all benefit from the sex industry and get paid their share of the profits. Keeping prostitution illegal is more lucrative to these pirates than legalizing the industry. (USD) $186 Billion worldwide according to havocscope.com.

Don’t get me wrong. Exploitation of women and children is bad. Kidnapping girls and boys from villages to be sold into sexual slavery is criminal – and if caught when attempting to escape these children are usually murdered – this happens in India. Human trafficking is unacceptable. Spreading of STD’s (Sexually Transmitted Diseases) is bad. But you’d be surprised at the number of women who really need to go into prostitution to make extra money or gain much needed cash in order to get out of tough personal circumstances. Most of these women temporarily go into the sex industry and get out as soon as they’ve made their money. What’s wrong with that?  Many prostitutes don’t have the luxury of having gone to school or to University in order to get the better jobs. We should all stop hiding behind so-called morals or religious nonsense and let people be free. The last thing we need is the government poking its nose into everybody’s business.

Men and most women too; will always enjoy multiple sexual partners with or without the constraints of marriage. There will always be women who are willing to exchange sex for money. It’s quite normal human behavior and should be accepted rather than persecuted. In my opinion having to pay for an orgasm, sexual experience or sexual fantasy is perfectly acceptable. It’s a much better alternative than having a society full of sexually frustrated apes.

Legalizing prostitution will also prevent triads and gangsters from being the only people capable of providing the business-fronts for sexual services in the form of bars, spas and other notorious establishments. This will free the working-girls from the necessary evil of the parasite-pimp (agent/handler)  who exploits them and sometimes even cheats them of their earnings.

Even marriage as we know it today is a form of legalized prostitution; where a woman is able to legally ply sex on the marriage market and men also compete to attract the best partners by displaying wealth, power and the capability to look after future offspring. (See Nature Calls – Monogamous Marriages – www.leafblogazine.com) So lets all stop pretending to be so damned pious and enjoy true sexual freedom from now on.

George Carlin  says it best in the video below. “Why should prostitution be illegal?  Selling is legal;  fucking is legal; why isn’t selling-fucking legal?”

“Why should prostitution be illegal?  Selling is legal;  fucking is legal; why isn’t selling-fucking legal? You know… Why should it be illegal to sell something that’s  perfectly legal to give away? I can’t follow the logic on that at all. Of all the things you can do to a person giving someone an orgasm is hardly the worst thing in the world.”  – George Carlin

Here’s another great quote by Vladimir Putin , President of Russia; during the 2016 U.S Presidential election which saw a tsunami of fake news about Donald Trump and Russian prostitutes. Well Putin basically says Russian prostitutes are the best in the world. Hard to disagree with that one.

‘I find it hard to imagine he (Donald Trump) ran to a hotel to meet our girls of “low social responsibility”… though they are, of course, also the best in the world.’ – Vladimir Putin 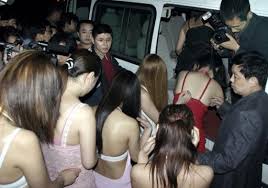