Over the weekend, two major announcements were made that demonstrate the strength of your people-power muscle.

It goes to show that corporate interests, billionaire lobbyists, and political roadblocks are no match for when everyday people come together to take a stand. Here are two exciting updates that show just how powerful your Leadnow community has become:

Jayawardena, this is huge — and make no mistake, it’s because our movement is winning.

Last week, when we heard that Prime Minister Trudeau was hosting a $1000-a-plate fundraiser in Vancouver, we decided to derail it with with a huge mobile billboard — paid for by members like you — that led a 700-strong march to the elite event.

Your people-powered protest became a huge national news story, and got Canada’s top political pundits talking about how Trudeau will lose votes if he keeps pushing Kinder Morgan. [2-4] 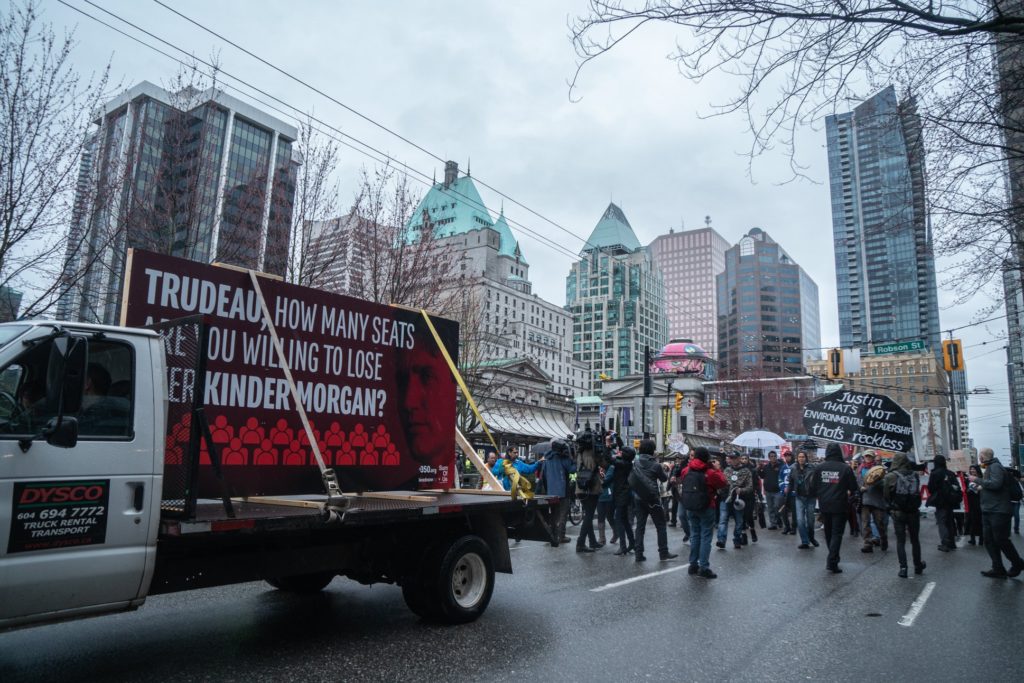 From Indigenous-led marches that brought out 10,000 people into the streets, to mass arrests of peaceful demonstrators at Kinder Morgan’s gates and a day of action in front of 50 MP offices across the country, the movement against Kinder Morgan is on fire.

While the fight isn’t over yet and we can expect a spike in pressure from pro-pipeline politicians, we know one thing is clear: Kinder Morgan is shaking in their boots, and their decision to halt non-essential construction is something big to celebrate. [5]

Trouble for Timmies
After months of pressure from the Leadnow community over their attacks on low-wage workers, Tim Horton’s reputation took a huge hit.

A market research firm just announced on Friday that Tim Horton’s brand reputation slipped from 4th to 50th — and their stocks have been in steady decline throughout 2018. [6]

Experts point to the people-powered response to Tim Horton’s cruel attacks on workers as the source of this brand hit — that means you! [7-8]

When the $15 minimum wage kicked in this January in Ontario, Tim Hortons thought they could get away with rolling back workers’ benefits. But then thousands of people flooded our petition and hit the streets outside 50+ Tim Hortons’ locations across the country to send a message to corporate head office that they needed to either buck up and reverse the cuts or face the ultimate consequence.

This weekend’s announcement proved that, indeed, they’re facing the ultimate consequence. Together we’ve made a fierce impact on Canada’s most iconic brand — which Timmies spends billions to carefully manicure — and friend, that’s huge.

Jayawardena, you’re off to a flying start in 2018. On our own, none of us would be a match for billionaire corporations. But when we raise our voices together, we can bring these giants to their knees.

Every time you sign a Leadnow petition, or chip in for a Leadnow crowdfunding campaign, you’re helping shift power away from corporations and political insiders and back towards everyday people.

I can’t wait to see what else we’ll accomplish together this year.

Thanks for all you do,

Logan, Jolan and Brittany on behalf of the entire Leadnow team

P.S. Special thanks go to our 2,473 sustainers who chip in every month to keep Leadnow going. None of this could have happened without your support. To maintain our independence, we don’t take big cheques from CEOs or the government — we rely on people like you chipping in what they can.