Illegal immigration MUST be completely wiped out!

Even legal immigration, if not brought about by matters of the heart ❤, as in marriage, MUST be totally discouraged.

If you want to work in a country you can always go there on a work permit and once your work is done return back to your home country.

Why, because people MUST stay in their own countries and Make them Great 👍Again, as President Trump says often times.

It is true that America is a country made up of immigrants from all over the planet. It is known as the salad 🥗bowl. Where immigrants unite to Make their Country Great, while still maintaining their own identities and cultures as Italians, Germans, Poles, and other Europeans. America was made what it has become today, by good Europeans and of course the black American community who were here from inception.

American culture is therefore predominantly an European Christian culture. What happens when Muslims and Hindus and Buddhists get in to this equation is not so much like America at all, is it?!

America’s success is due firstly for the Country being a Constitutional Republic, founded by The Founding Fathers. The election of President Trump into office on 20th January 2016, further enhanced this fact. Thanks 🙏 be to the Powers that be and thanks to the Trump Supporting Conservative Patriots!

No doubt, America is what it is precisely because it is made up of many different peoples! But, the important fact is that these different people have united as one ☝🏽 under one flag 🇺🇸- that of the United States of America 👏🏽👏🏽🙏🏽🙏🏽👍🏽👍🏽💪💪🇺🇸🇺🇸❣❣

The original immigrants came to this Country to better themselves, to share their expertise, to give of themselves to the Country and most importantly to enjoy the freedoms afforded them as Americans by The Constitution. To live as free men and women enjoying the benefits of Natural Law which gives you Unalienable Natural Rights. 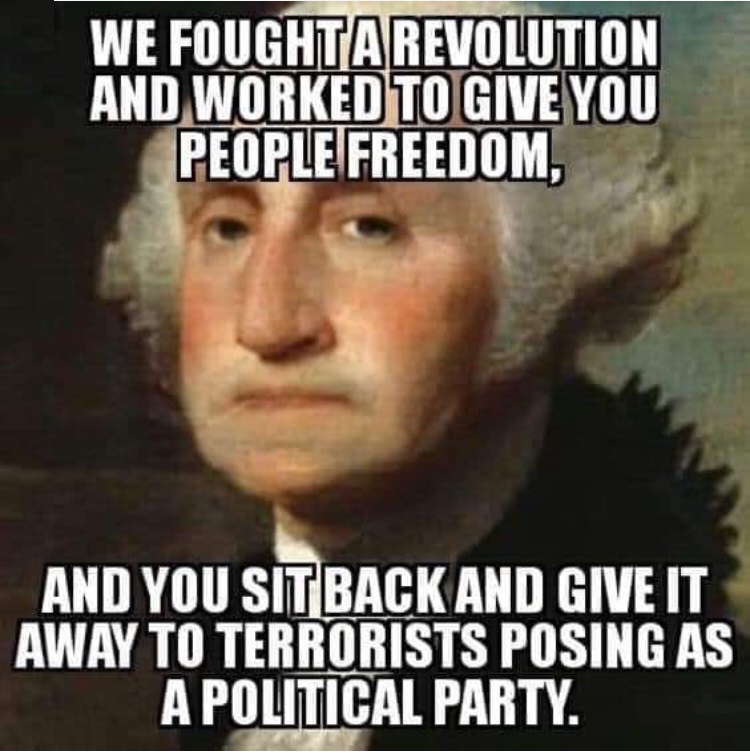 There were no terrorists as we know them today, then, on this planet! And, no patriotic American will ever bring into his midst, and in to the midst of his family, individuals with criminal and terrorist backgrounds.

The socio-political climate then was totally different from that of today, where mass immigration is being forced upon us by the Socialists under the false banner of Progressivism, following the agenda of the New World Order proponents!

These people want to make America disappear and install in its place their own demonic socialist state, so they can manipulate the “masses” as they so wish! These “masses” however are totally ignorant of what is being done to them! Or are willing accomplices who are in the payroll of the hierarchy. 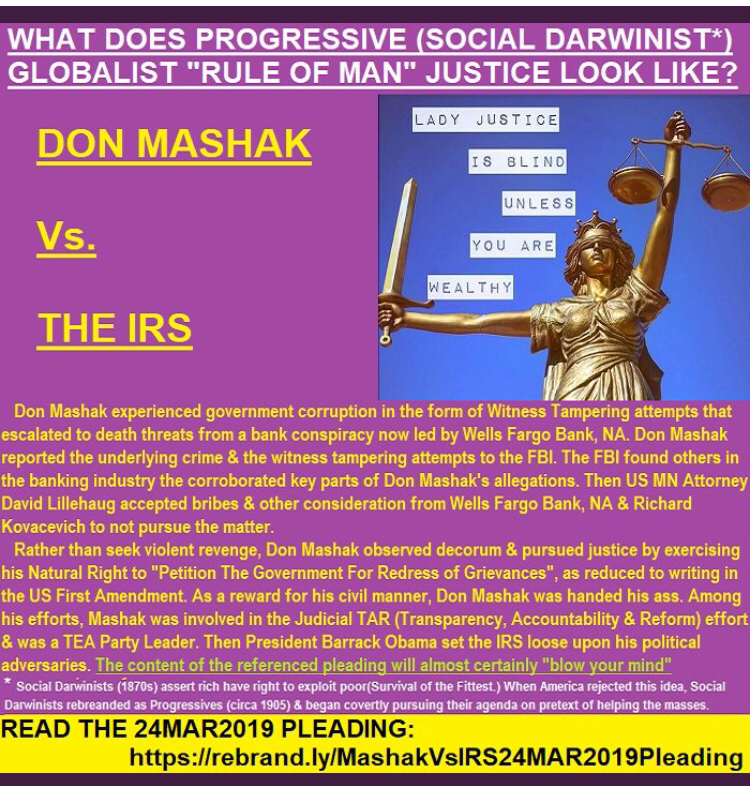 The “Progressivists” also make the “masses” believe there are two parties involved in this whole exercise. While the whole time it has been one party of RINOs and DINOs, dividing the people!

These minions follow the orders of the Progressive Socialist Globalist hierarchy parrot-like, with no questions asked. They are the seditious traitorous Soros’s paid for and bought puppets!

The type of mass immigration that was being foisted on America lately, by the Deep State, of individuals holding criminal records and terrorist records being brought into the Country freely, has possibly stopped. With the involvement of ICE, flushing out these criminals, and of course the tireless work of Border Patrol and the U.S. Military that kept at least three or more Caravans of utter tripe at bay along the southern border, I believe, illegal immigration is somewhat under control.

But those so called Somali and who knows what other Muslim “refugees” are been harbored in what they call “sanctuary cities!!! What bullshit is this?! In the first place where is the right for anyone to create any “sanctuary city” inside of these United States?!

All so called sanctuary cities MUST be abolished, disintegrated and their inmates deported with immediate effect. This is of paramount importance in maintaining the territorial integrity of these United States, as it is being divided and broken up by the enemy within from within. e.i. The Socialist Darwinist ‘progressive’ Globalist elite who are the Democrats, the RINOs and their New World Order masters.

I believe Judicial Watch has filed a case contesting the right to the existence of sanctuary cities.

While all of this is taking place, in these now chaotic States, migration is still going on unabated, with about a million immigrants pouring into the Country, legally, every year!

This too MUST Stop 🛑

The Muslims from everywhere who have come in with the help of criminals like George Soros and other members of the Council on Foreign Relations or CFR,, (do not be confused with the United States Senate Committee on Foreign Relations), are here as they have been brought to America with the express purpose of making America a Muslim State! (The first step in this direction was taken by grooming Barak Hussein Obama as a Presidential candidate!). 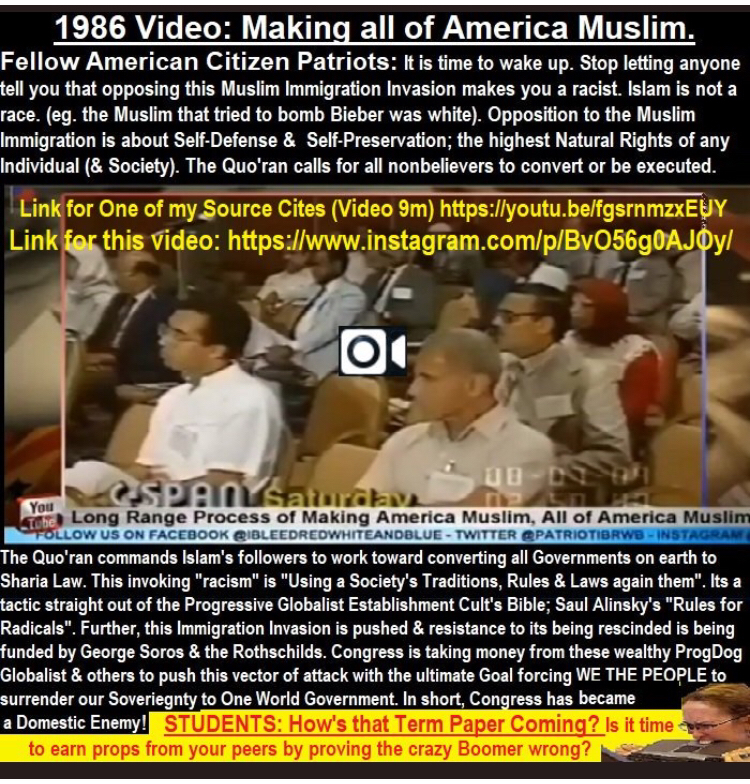 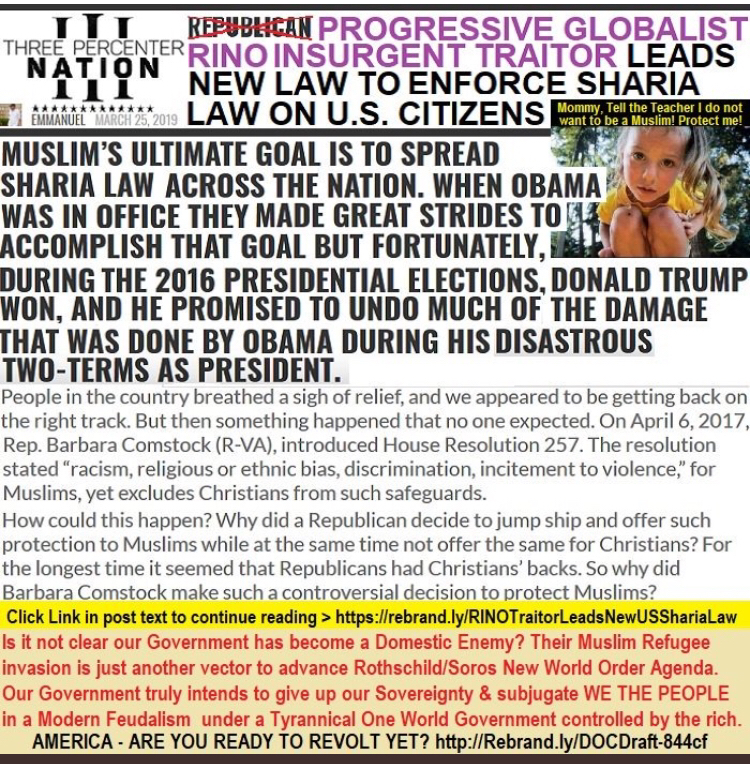 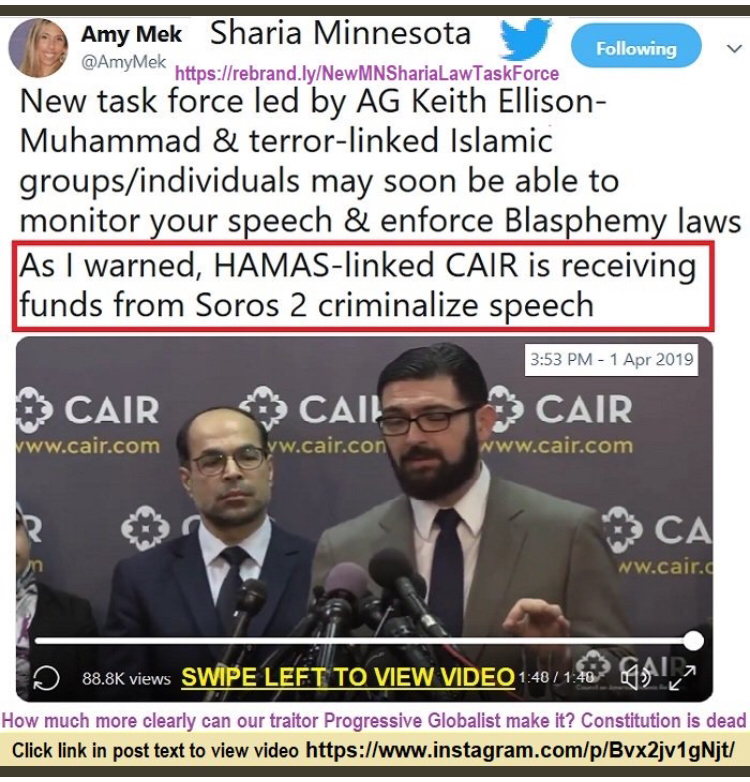 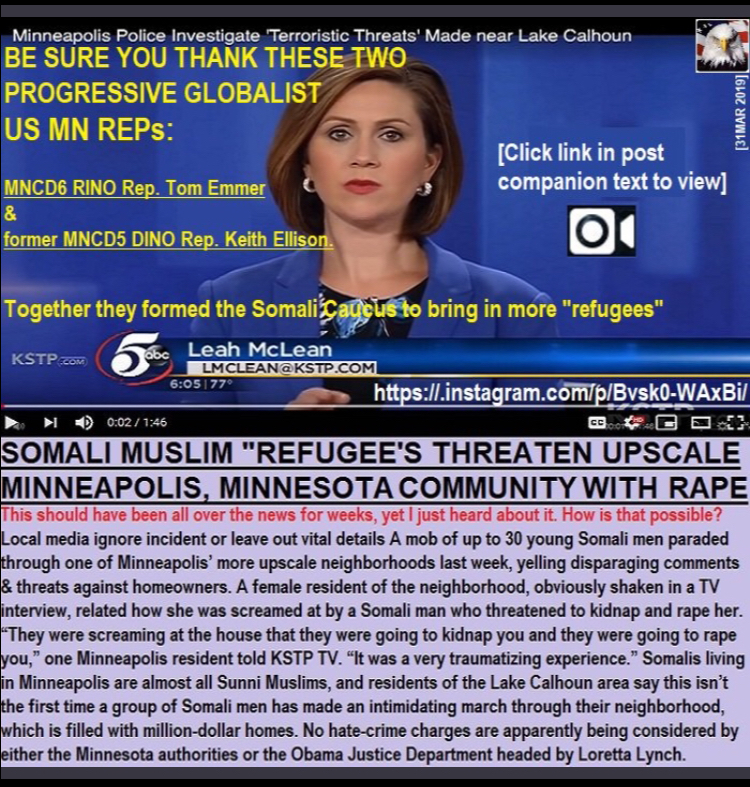 There is enough evidence of this in the Congress today. Some of them are now “elected” persons running riot in the august chambers of Congress blatantly furthering anti-Semitism! This activity is absolutely Anti-American! Their agenda is to turn America into an Islamic socialist hell. (I will deliberately not mention them by name here, hence I give them unfound publicity on this Blogazine). We all know who they are – the Unmentionables! The Squad!

With immediate effect, these Muslim elected persons MUST themselves be deported along with their terrorist electorate which has been brought down from all sorts of unruly terrorist ridden places, with the express purpose and intent of destabilizing these United States!!!

This is the reason for the mass influx of Muslims who are mainly terrorists, individuals with terrorist intent or individuals who support terrorism by commission or by omission. These individuals who have now been found out by organizations like Judicial Watch, to have actively participated in gross anti-American activity abroad promoting terrorism against America with banned terror organizations!

This amounts to high treason!

The CFR along with the DNC which is their working arm, have created Sanctuary Cities ‼‼‼ Our Founders would have shot the lot of them down‼ Sanctuary from what⁉

Sanctuary from the law!

We The People – Do NOT be fooled here! These sanctuary cities have also been created for the safe sanctuary of these very elected officials and some who couldn’t gain election, to be harbored in case of a Country wide search warrant been executed, for their heads, come 2020, when they will have to run for their sorry ass blue lives!

These elected and unelected persons are living in a world of their own, completely unaware of the true reality pursuing them hot on their very heels 👠!

This scenario that was being worked out in America was also worked out in Canada, all of Europe including the UK, and in Australia! We have to put an end to this mass migration of the NWO and pack the lot of these Muslim immigrants and “refugees”, illegal and legal, all, back to where ever the hell they came from! Now!

Send the lot of them packing back! Let them go back to their own countries and make their countries great again! This is what the world needs not invaders in the name of spurious migration with Evil 😈👿 intent!

The planet MUST be rid of this infestation! Now! Facing the dire consequences for inaction is NOT an option! 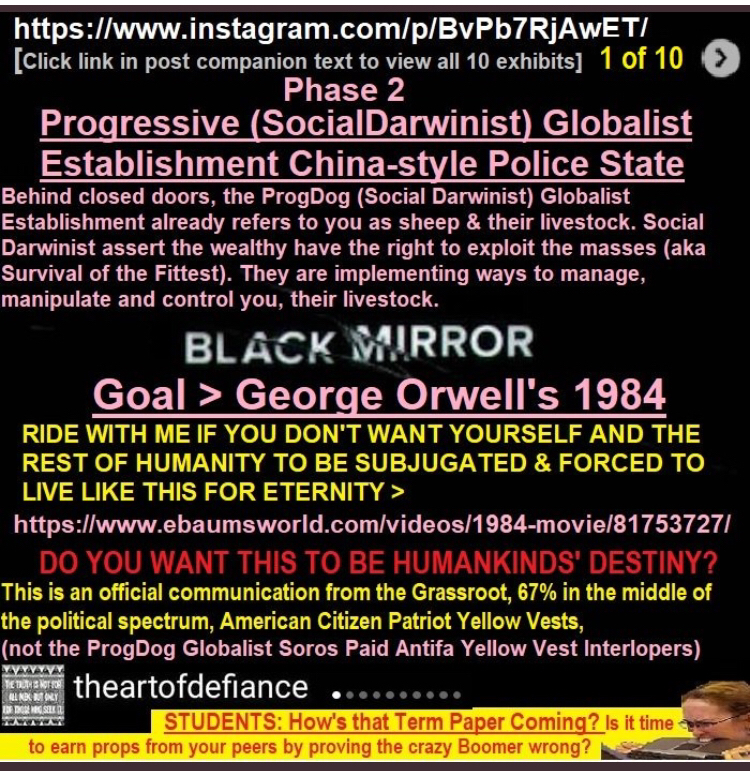 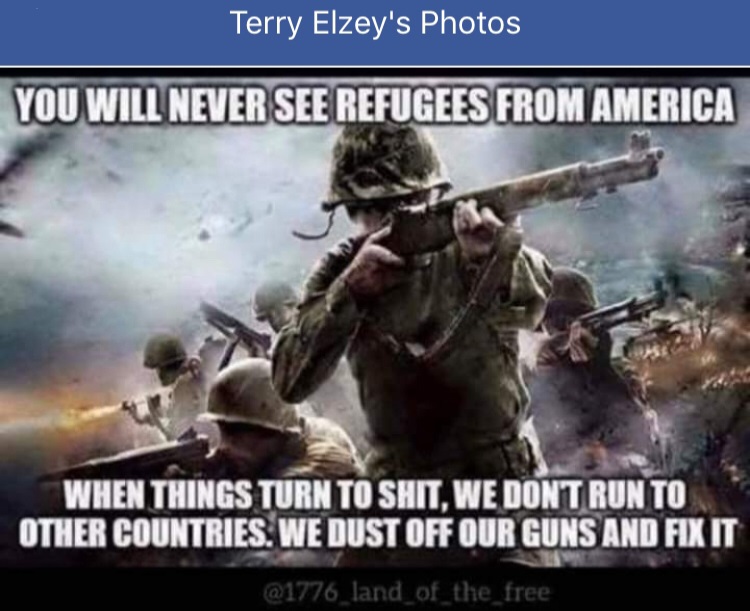