Teri Koko from Toronto FLOX (Chemical vs Natural Ingredients in Everything) Facebook Group.

This is her story –

Our 2017 3rd Toronto Canadian Worldwide Fluoroquinolone Toxicity Awareness Annual Rally, held in Toronto at Queens Park Circle in front of the Legislative Assembly Building on September 26th & 27th, proved to be quite successful. Thank you to the Floxed people (our name for fluoroquinolone toxicity victims) and supporters who attended and to the entire online Facebook Floxed community, many of whom are bed-bound or house-bound and wished they could be with us. We did our best to keep the online community updated, and appreciate their support and prayers.

Next year Terrance Young, former MP of Oakville, will also support us and giving a speech at our 2018 Rally! Terrance introduced the “Protecting Canadians from Unsafe Drugs Act” which became law on November 6, 2014. It has been dubbed “Vanessa’s Law,” after his fifteen year-old daughter Vanessa, who died of a heart attack after taking a prescription for a minor stomach ailment. Unfortunately, we connected with Terrance only days before the rally started, so he was unable to attend. He would have loved to join us. In his place he sent David Carmichael, Executive Director of Canadians for Vanessa’s Law. David dropped by and spent time with us at the FQ Rally. His is a tragic story of unbelievably horrific consequences from the antidepressant Paxil.

Now more fantastic news! We were filmed for a documentary called “Pandemic of Denial” produced by Give Pain A Voice. The award winning film producer, Tina Petrova, made a special trip to film Mark Girard’s speech and to interview him for the film. She did a bit of filming with the rest of us, as well. If I am correct, she said “this will be in the film festival too” … I guess next year!

The photo includes from left to right Cindy Girard from Ottawa, Terry Holman who drove from Northern Kentucky, Mark A. Girard (Cindy’s brother) also from Ottawa, Amr Rashidy from Toronto in the background, myself, Teri Koko from Toronto, and Lynette Alm Pelletiere who flew in from Chicago. There is also one other Floxed victims, and an FQ Supporter not with us that day in the photo: The first day of the rally we also had Peter W. Dunn of Vaughan (boarder to Toronto) a Floxie, and A Torontonian who is an FQ Supporter.

The antibiotic Clindamycin led me to Cipro 7 months later. My life as I knew it changed 180 degrees back in April 30, 2013…poisoned by a North York walk-in clinic in Peanut Plaza on Don Mills Road by a family physician who denied both toxicity poisoning’s she prescribed me! I then experienced pain beyond comprehension, which made it impossible to do anything for myself. My sister had to take care of me. It would literally take hours just to get out of bed. I had sustained well over 30 serious damages within hours, weeks and months after Cipro, and diagnoises with several diseases like DDD (losing 3 inches in my height), liver and kidney, nerve, tendon ruptures, heart damage, sweat gland damage (no sweating) fibromalgyia 18/18, arthritis, severe chronic insomnia (no sleep 1-2 minutes intervals with maybe 20 min. per night only for over 2 years!) that started after 1 Cipro pill, I couldnt stand or walk for more then 5-10 min. nor sit in one place too long – The list goes on!

Mark is one of the leaders of the fluoroquinolone community. He leads dozens and dozens of Facebook groups, both public and private, to provide awareness and support. He was given Levaquin in 2008 for a MRSA infection in his ankle. The doctor, thinking it was a traditional antibiotic, doubled the dose and tripled the duration. As adverse reactions started to occur, they gave him more and more medications, many of which were contraindicated. If it wasn’t for one doctor realizing that the sudden appearance of so many additional issues was due to the drugs, and got them to take him off of everything, Mark would not have survived. They would have blamed the infection for his death – not the drugs that poisoned him! Mark’s life collapsed with so many new medical challenges including psychosis. In 2010 Mark was the first person to notify our Canadian government that there is something seriously wrong with fluoroquinolones. In 2011, he was featured in a Global TV episode of 16×9 with investigative reporter Shauan O’Shea at https://youtu.be/Scyd59nUG7s. It was aired across Canada and featured two other fluoroquinolone victims Marsha Crossly/Cohen, a professional Ballet Dancer and Studio Owner from Toronto, and Gee Belair, IT professional from Montreal; as well, Terrance Young, and also Tony Merchant of Merchant Law Group.

Cindy Girard, author of The Great Escape: “Helping Someone Break Free from the Deep, Dark Dungeon of Depression”, was floxed 30 years ago while attending university. After her brother moved in with her due to his many FQ toxicity health issues she helped him organize the first FQ awareness rally in 2014. There she met myself, and a few other Floxies where she put the pieces together that 30 years of unexplained health challenges can almost all be explained by FQ toxicity! Sadly, Cindy’s best friend, Lisa Hetherington of Hamilton, has supported us at the previous two rallies, but broke her dominant wrist a few days prior to this one. As she uses a walker to get around, a broken wrist not only makes it difficult to get anything done; but it also messes up mobility. So, she was not able to attend like the other years.

Amr was floxed 10 years ago and only found out 5 years ago when he was floxed a second time. Lynette was given Levaquin many times over the past 8 years and only discovered 2 years ago that it was the cause of her serious decline in health, including hearing loss and chronic pain. Terry retired from the Minnesota Air National Guard. He had been given fluoroquinolones multiple times for prostate with no apparent problem. Then 2 years later another round of Cipro got him at age of 54. He went from being a long distance runner to being unable to stand for even a few minutes. Peter W. Dunn Who was given 6-7 courses of Cipro between 2000-2007 for traveller’s diarrhea after trips to Africa. He developed both neuropathy and tendinopathy.

We also had the pleasure of meeting Damien Waddle, Legislative Assistant to the NDP Health Critic who came out to greet us. Mark introduced our FQ cause and shared his story. Mark informed Damien that each Floxie present at the rally represented tens of thousands of Floxies just across Canada, and many more in the USA and abroad. Damien was quite surprised at the extent of damage FQs cause to perfectly healthy individuals of all ages. All the damage because a doctor prescribed the atom bomb of antibiotics for sniffles or minor infections. Damien was quick to give us very helpful tips and advice, and assured us that he’ll share our FQ alert. He looks forward to seeing us again there next year; but Mark will continue to connect with him over the year so that we may all be better prepared for next year.

We missed Sheila Karpis of Brantford, who was instrumental in getting the first rally organized. She is also the designer of the informational signs used at the rally booth to catch people’s attention and bring awareness to the problems of FQ toxicity. She has done a lot to promote awareness of this huge issue. We hope she will be able to join us next year.

Again, I would like to extend my sincerest thanks to both of our amazing and awesome USA Floxed that came all this way to support the Canadian rally!

We Give Pain A Voice!

TOGETHER WE ARE FLOXED STRONG! 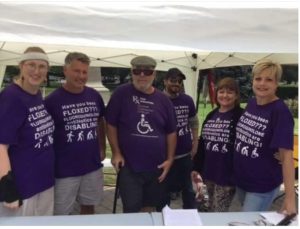 “According to information I received, at time of this article, from the now defunct Fluoroquinolone Toxicity Research Foundation it has been estimated that more than 10% of the entire world population has been prescribed a Fluoroquinolone up to the year 2005. Between 1993 and 2005 there were 300 million patients treated with LEVOFLOXACIN worldwide alone.

Anyway, at the bare minimum more than 13 million such patients, during that time frame and many, many more if you extend the reporting period to 2010, had experienced an adverse reaction that was not recognized, reported or treated by the physician. I think the key phrase is “not recognized” or if I may rephrase, not connected back to the FQ usage.”