Let me first tell you a bit about this journal. It is my very first attempt at making a journal and it is no surprise it is a junk journal because this is not the first time I was inspired by junk, let’s say 😄.

My writing ✍️, meaning my very first collection of poems that came out published titled Wet Paint, was actually inspired by a copy of Vogue Entertainment Australia. I literally dove in and picked it out from a pile of discarded printed matter which was going to be a money making venture for someone who wanted to make money from trash. Though that venture did not get off the ground, Wet Paint and subsequent collections of poetry and fiction did. They were mostly inspired by the finding of this magazine!

This copy of Vogue Entertainment remained my go to source for inspiration way into the days of writing my novella and even beyond that. This journal remained etched somewhere at the back of my head for a very long time. Up until I lost it all to white ants and flooding, due to bad storage of my stuff while being taken ill 😢!

So that’s a bit of background information 😁.

I’ve done so much work for the boy’s junk journal.

The video was only a sneak peak into the Journal as a whole.

I believe it needs more elaboration in terms of explanation of certain elements that went into the making of it. However unintentional they may have been.

That’s why I’m here, to give you more close ups and sneak-ins as to the Journal hot off the press as it were.

He also paints with his mum. Mum’s an artist. He cooks and does gardening with her. He cycles.

He’s now into his double digits, and looks like there’s no turning back as he makes his way into club cricket!!

There’s no way I can cover all of his pursuits in one journal!

So, here I am making a junk journal focusing on his heritage.

Did I say he is already into collecting junk – bottle caps 🤩. He also collects rocks and crystals, as I’ve stated in the video. 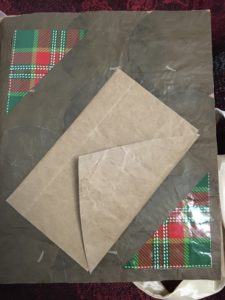 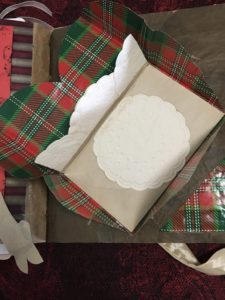 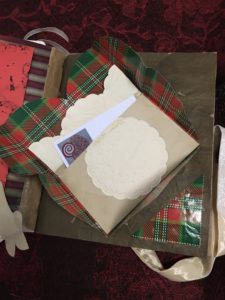 At the heart of the envelope that opens out in to a heart, is a hidden envelope!

Then there’s the folded paper pocket for collecting paper, ephemera…

The front and back covers to this journal are of discarded cereal box board, pasted over with vintage boys wall paper.

The pages inside are all, excepting two, of brown paper bags that bread was wrapped in.

The journal has four signatures with each signature holding four pages.

It is bound together by Coptic stitch so that it opens out flat. I pasted them together just a smidgen along the spine, first, to ensure its’ durability.

That being said, as I take you through the journal, something struck me. Having focused on his heritage, I have in each page, created an element of motion through it all, I think.

As you open out to the first page there’s a badge I created by fussy cutting a print out  backed with cardstock / paper, which says, “You are Amazing”! 😊 Fussy cutting leaving a border around the backed up image with a pair of detailed scissors will make it stand out.

On to the next page and on the left I’ve cut out waves, almost waving 👋🏽 🌊, at you “hey” and also the waves 🌊 are indicative, as I pull out the blue-ish batik inspired journaling mat, of him the swimmer 🏊🏽‍♂️ 😊.

From the opposite page, I pull out this miniature of a playing card I picked up walking him back home from school one wintry 🥶 afternoon. Including the card in a randomly formed pocket in the middle of the art 🖼 page I created, especially for this journal, hightens the element of motion and movement that recurs through the Journal.

I may have intuitively done that there, after having seen Chris Garcia’s own art page from the Art Journal Community Group.

The next page opens out to a muted bear 🐻 paw 🐾 on the left and moshi moshi post it notes 📝 on the opposite page saying: “I love you more than I can bear” 😊. It all ties up with the bear charm hanging from the steampunk chain embellishment, on the front cover.

The bear charm has a lock 🔐 on its face. The charm above it, which is the key 🔑, is attached to the steampunk chain on the blue jeans pocket with a safety pin 🧷😁. I thought 💭 it was pretty snazzy 😎. The chain was purchased especially for this journal.

Turning the page, you are up close with bits from his heritage which is a map 🗺 of Sri Lanka 🇱🇰, together with a Dymaxion Airocean World 🌍 map by R. Buckminster Fuller. The pocket that holds them together is blanket stitched 🧵 around the edges in yellow embroidery thread, adding to the texture.

So now you get the thread or the drift. I leave you to take your own journey through the rest of the journal, to draw your own conclusions, having introduced you to its main elements. Let me know what you come up with 😊. 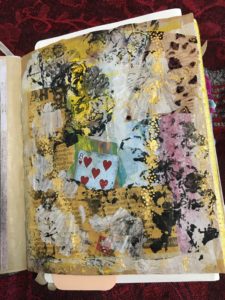 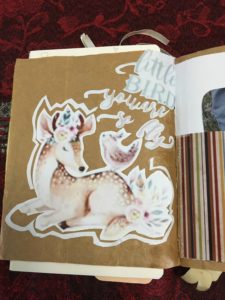 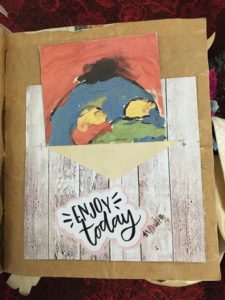 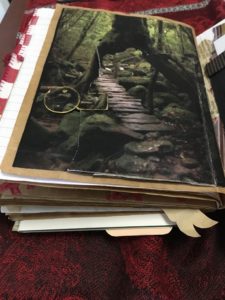 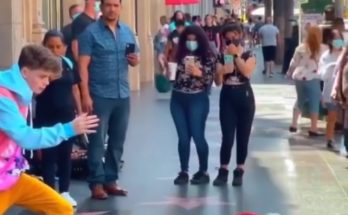